Killer Clowns is an electrifying combination of inspirations from the arcade classic: Berzerk, and the cult classic film: Killer Klowns From Outer Space. With touches of elements from some of the developer's favorite games like Dead Space and Super Smash TV, Killer Clowns is a tough-as-nails arcade experience from outta this world. 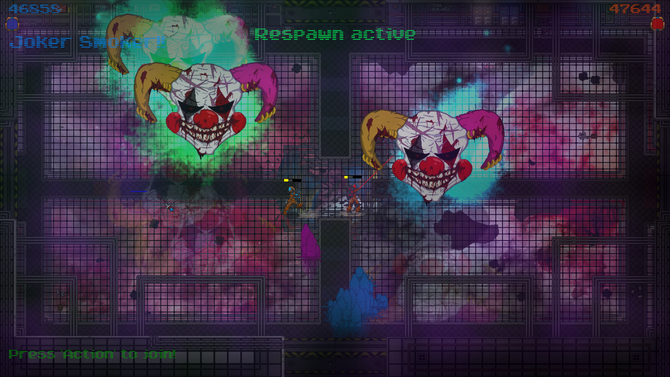 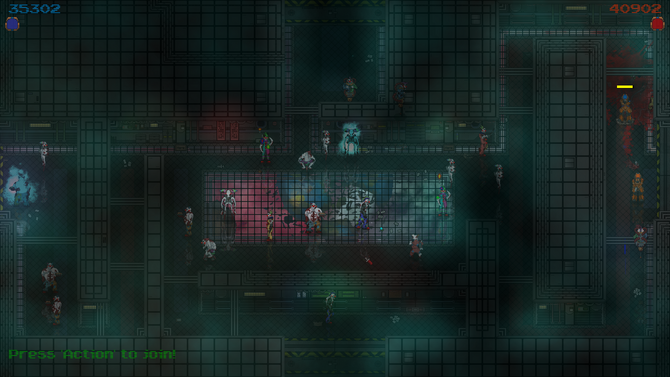 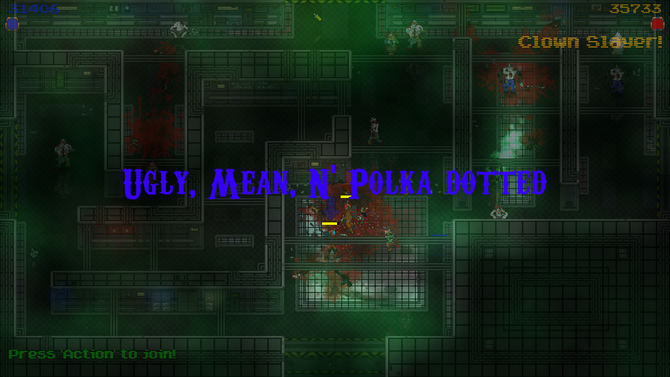 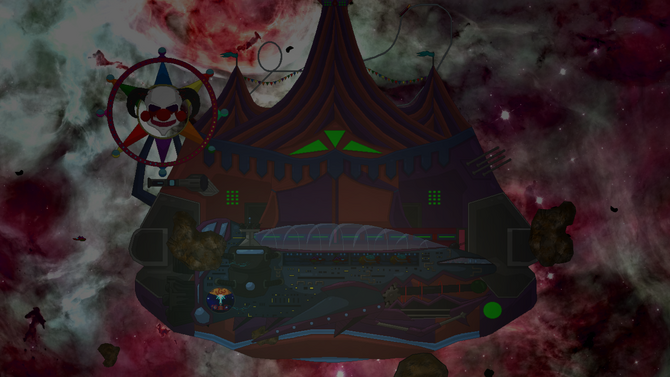 Single player, Co-op (Local), Versus (Local)
Set in the distant future, Earth struggles for survival due to a shortage of resources. The Planetary Resource Importation Corporation sets to the stars with their best vessel: the Andromeda in search of a future for mankind.

What they found instead, was an intergalactic circus from hell.

In the midst of finishing up their latest excavation, the Andromeda is hit with an strange EMP, activating the ships electric wall security measure. Thrown into a panic, much of the crew was not prepared to face the horrifying mutant clowns that were currently boarding their vessel!

While the rest of the crew was trapped and slaughtered aboard their ship, four unaware Cosmonauts hastily return to the Andromeda. Thinking themselves lucky for catching their ride, the Cosmonauts land in the docking bay, then use the teleporter to quickly get to the Living Quarters section. Upon arrival, the four notice the electric walls and are soon after attacked by alien clowns! Realizing that they themselves are now trapped, the Cosmonauts goal is simple: get to their cruiser back in the docking bay and escape. But these gruesome bozos have some nasty tricks hidden up their sleeves, and seem to know the Cosmonauts every move. Now they must outwit and slay any clown that stands in their way! But the longer they linger, they attract the attention of the ever-hungry Jugularnaut...

Killer Clowns is a top-down arcade shooter with a play style similar to the classic arcade hit Berzerk.

Players take control of one of the four Cosmonauts armed with blasters. Players have free movement and can sprint if holding the sprint button while moving. Players can also dodge roll if they press the action button while sprinting, this can be useful for a temporary speed burst or dodging through a pesky pie. To fire the blaster, players must hold the aim button to enter aim mode, use the movement to aim the blaster, then press the action button to shoot.

Controls can be found in the options on the main menu.

The players main objective is to get through the ship to the docking bay by either eradicating the clown presence in each room, then leaving, or escape twice to "run away" to the next level.

Much like Berzerk, the walls throughout the levels are electrified. Forcing the players to be mindful of the positioning of their characters while they attempt to fight the clowns. Although the walls are a major hazard to the players, the clowns are also vulnerable to the electric walls and run into them as well. If a player runs into the electric walls they are not killed immediately, unlike in Berzerk. Instead, they will become electrified and have a "countdown" to leave the level before the electricity kills them.

If the players take too long in a level, they will attract the attention of the ever-hungry Jugularnaut, who will begin to spawn into the room. Once he spawns in, he chases down the closest player and attempts to consume them. Though the Jugularnaut is a formidable foe, the players can choose to fight the Jugularnaut, but he must be defeated twice before he flees the level.

The different stages are based around the varieties of clowns that are present in the stages. There are 50+ stages, as well as boss stages at the end of each chapter. When players arrive at the boss stages, they must defeat that chapters Jugularnaut to move on, due to the room going into full lock-down.

Throughout the game players can discover PDA's written by the Andromeda's crew members. These PDA entries are messages sent between crew mates and personal logs, some of these entries are important for the story, others are not.

Powerups known as Hypos are scattered throughout the game. Players can use these to obtain new temporary abilities and gain an advantage over the onslaught of clowns!

Community content is available under CC-BY-SA unless otherwise noted.
Advertisement